We will give you a fantastic tour in the last wild and magical corner of Jordan. We always focus on customer satisfaction and offer beyond the expected. The main desire of Bavaria Tours is to provide magical and unique tour experience for the best value, while showing the most spectacular attractions, activities and hidden places in Jordan.

This tour has a lot to offer, it covers all of the attractions in Jordan and specially designed for those who seek relaxation and a good dose of pampering. With the sites included in this tour you will start by historical attractions in Jordan. You will travel in time and when you close your eyes, you will be in the times of Romans, Hercules, prophets, Nabateans, Umeyyads and many others. This tour will offer you an adventure once you visit Petra and Wadi Rum, it will also spoil you with some natural spa treatment and relaxation when you spend the last days in Aqaba and the Dead Sea. 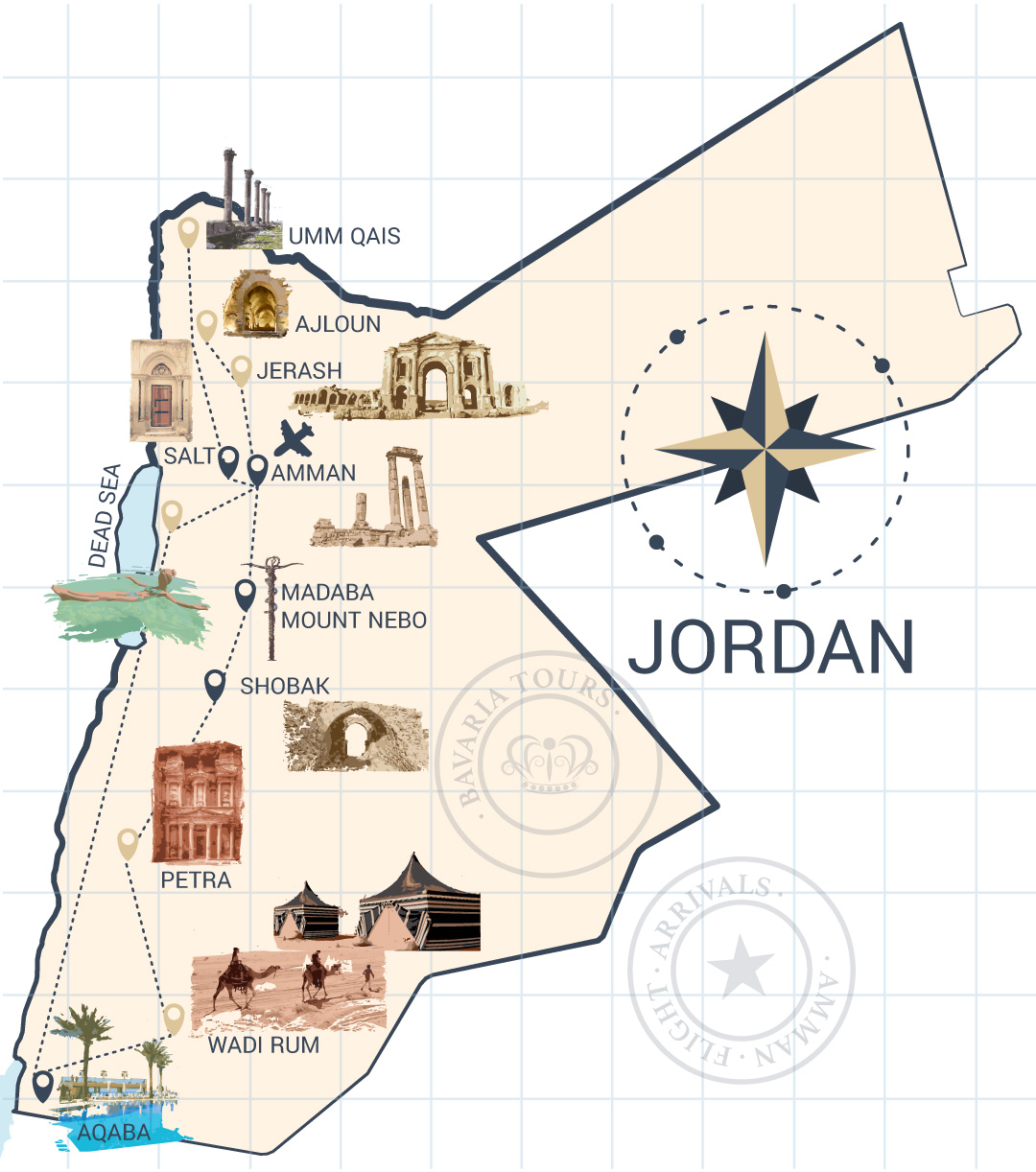 Arrival at Queen Alia Airport, with meet and assist service included. An agent from Bavaria Tours will meet you at the gate of your flight, handle your airport formalities and save your time.
Depending on the arrival time of your flight our agency can add activities to this day if you arrive early to Amman.

On this day you will visit the most preserved Roman city of Jerash. The site includes incredible ancient ruins, which date to the Roman age 63 BC. Your second site will be the Castle of Ajloun, that was built to protect the region from attacking Crusader forces and goes back to the 12th century.

You will start your day by visiting Al-Salt and the Islamic shrines. After that you will explore Pella that represents one of ten Decapolis cities that were founded during the Hellenistic period and became powerful under Roman jurisdiction. On this day you will visit a town in northern Jordan principally known for its proximity to the ruins of the ancient Gadara.

In Amman you will visit the Citadel, with the outstanding features of the Roman Temple of Hercules and the Umayyad palace. You will also visit Amman’s Roman Theater that goes back to the 2nd century, seats about 6,000 people and built into the hillside.
After that you will be exploring the desert castles of Jordan. Those castle were erected by the Umayyads in a number of characteristic palaces, some in the cities, but mostly in the semi-arid regions, and some along important trading routes. The castles were built roughly between 660 and 750, under the caliphs of the Umayyad dynasty.

Day five will start in Madaba, which is the center of mosaic art, featuring the oldest known map of the Middle East. Your second destination will be, Mount Nebo, where Moses was allowed to see the Promised Land, and the place where he died and was buried. After Nebo, you will head to Shobak Castle, also called Montreal that is a Crusader castle on the eastern side of the Arabah, perched on the side of a rocky, conical mountain, looking out over fruit trees below.

Jordan’s main attraction, and one of the seven wonders, will be waiting for you! You will go back in time, 2000 years ago! The site of Petra was built using simple picks and chisels, Nabataean masons created mountain-top high places for worshiping their gods, cut stairways to reach them and grooved channels into the rock to bring water from springs in the hills into the city.

On day five you will move from Petra to Wadi Rum, which is known as ‘Mars on Earth’. The place is enormous, timeless, practically untouched by humanity and destructive forces. In Wadi Rum you have a two hours jeep tour through the ever changing dunes. Weave through the trackless desert and tackle the highs and lows of the sand.

You will start your day with free time to enjoy the desert. After Wadi Rum you will move to Aqaba to spend the time at the Red Sea, you can enjoy your time tanning, swimming, snorkeling or diving. On this day you will have a boat trip and lunch in the sea.

You will start your day with free time at the Red Sea until mid-day. After Aqaba you will move to the Baptism Site of Bethany, which is believed to be where Jesus was baptized by John the Baptist, the historic site includes a water collection system and pools as well as later built churches, chapels, a monastery, hermit caves, a cruciform baptismal pool, and a pilgrim station.

Your time at Dead Sea will be a unique relaxing experience. The Dead Sea is the lowest point on earth and where clean air with oxygen content is 8 percent more than normal. The seawater is 10 times saltier than any other sea, it will take you up, heal and maybe burn you a bit.

The Dead Sea is the lowest point on earth, 430m below sea level, you will be floating in the mystery of the Dead Sea, a landlocked body of water 10 times saltier than the ocean. Your next destination in this day will be going back to Amman and have a dinner at a local restaurant.

Arrival at Queen Alia Airport with meet and assist service included.
Depending on the departure time of your flight our agency can add activities to this day if you leave late from Amman.

· Meet and assist upon airport arrival and departure.
· Hotel accommodation in a Double Room.
· Meals on Bed and Breakfast.
· Transport by an air-conditioned coach throughout.
· Excellent language-speaking guide throughout.
· Entrance fees to all visited sites.
· Horse ride in Petra.
· Two hours jeep tour in Wadi Rum.
· Free entry visa to Jordan.

· Lunches.
· Dinners.
· All kind of tips and portages.
· Horse drawn carriages in Petra.

Add Details of Your Tour